June 9, 2017: This is the common problems page for the current public release of VSPAERO and OpenVSP (3.11.0) As more versions are released, this page will be updated. Enter any problems that are a common occurrence for you, what caused the problem (if you know), and how you fixed it (if you could).
Page organization and creation in progress, if you have any suggestions, comments or corrections use the link at the bottom to email me (or if you can edit it yourself)

Before proceeding to the problems, check out the VSPAERO tutorial and the modeling for VSPAERO pages to get to get a good base understanding of how you should be using VSPAERO and getting your model ready for it.

Although OpenVSP and VSPAERO are great geometry and aerodynamic tools, VSPAERO can be very specific regarding what geometries it accepts. What makes this even more difficult to troubleshoot is that many of the issues can be situation dependent, but these are my findings for general cases. Many if not all of the issues I come upon are due to the interactions between VSPAERO and the degenerate geometry files used. These can be due to zero diagonal issues which are due to discrepancies in cross section interactions with other cross-sections. Other issues arise just due to the type of cross section used within certain geometries.

In a particular example, this happened when creating a fuselage where the required shape of the end of the fuselage was flat. The first attempt to do this was made by setting the location of the second to last general fuselage cross section to the same place as the point section to get the required flat end to the fuselage. When the degenerate geometry file was created to be used for VSPAERO, the plates it created were warped and twisted ever so slightly on the very end of the fuselage, and the solver could not properly handle this shape.

Later I discovered that this only occurred for me when using the general fuselage cross-sections going into a point section. For general fuselage sections, they seem that they need to be slightly displaced from the next cross section. Another example is with the custom Transport Fuse geometry. It has never been friendly to me for some reason, so when I remade my own using the default fuselage geometry, I discovered that while general fuselage cross-sections need to be slightly offset from other close cross-sections, the opposite applies to elliptical cross-sections. The ellipse at the end of the transport fuselage was slightly displaced from the final point, and this was causing zero diagonals. The solution for me was to make the ellipse and the point in the same location, i.e., both sections at 100% of the fuselage length. This can be seen in the GIF below. The GIF is a preview of the Degen Geom plate view exported by OpenVSP.

Another source of many VSPAERO problems is when a custom Geometry is used from the Geom Browser. For example, if you create a cone using the cone option from the geometry browser and then attempt to use VSPAERO on the cone it fails. However, if you create the same exact cone from a general fuselage geometry selection, it solves in VSPAERO. In general, the best choice is to stick with the eight default options: Pod, Fuselage, Wing, Stack, Blank, Prop, Hinge, and Conformal.

Another difficult area of troubleshooting is intricate wings. Winglets can cause problems if they get somewhat thin on the tips, and using more complex airfoil shapes like Bezier curves. The biggest thing to note here is that if you discover that one of your wings is causing you problems, play with the blending settings. Granted this cannot be applied to every occurrence, but it has been very helpful thus far. In general, when blending a wings sections, you usually want to either mix the outboard into the inboard leading and trailing edges or vice versa. There are other options and ways to blend, but these have been a general rule that works for me most of the time.
More detail coming soon 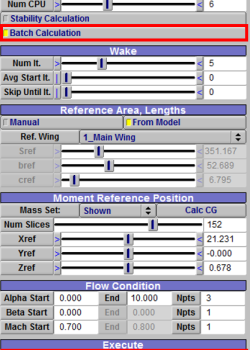 Due to the VSPAERO tutorial page is a little dated in certain aspects, I am going to go over a little bit of the case setup for the most recent version of VSPAERO. Most of the process is the same except for a few things.

You still need to create a Degenerate Geometry file before starting the solver, but this can be done within VSPAERO now. First, you should select which geometry set you would like to analyze, and then click “Generate Geometry” at the bottom which is highlighted in red in Figure 1 to the right.

Another thing to note is that if you are going to be using more than one point of flow conditions, like a sweep of AoA for example, you need to have batch calculation selected. If you do not, when you create the setup file VSPAERO only reads in the first point of your flow condition sweep.

Another issue whose cause is still unknown to me is that for some geometries, certain numerical models work while others do not. For example, a Vortex Lattice Method (VLM) may not work but the panel method will. I believe this could be due to the assumptions made by the VLM. This ties into another issue that I find when using the panel method, which is that VSPAERO runs and finish the solver, but then the results will not be accurate. When I have used the panel method and then tried plotting CDtot vs. CL over a sweep of different AoA, they all end up equalling zero.

OpenVSP 3.12.0 included many enhancements to VSPAERO specifically. It allows for more control over VSPAERO including the use of control surfaces and no longer needing to create a setup file. In the pictures below are examples of how the GUI of the new case setup window has changed.

One of the outstanding new features is the ability to preview the degenerate geometry plate in both VSPAERO and the geometry browser. When you have the “Preview VLM Geometry” option selected, the model viewer will apply a view similar to the view I used above in the GIF to show the difference between degenerate geometries. Another difference between the VSP 3.11.0 and 3.12.0 is that you now need to create degenerate geometries of the desired parts before going VSPAERO again as in previous versions. Make sure the correct Degen Geom file that matches your geometry and mass set is selected in the advanced tap of the case setup. As before, be aware that if sweeping through different flow conditions, the “Batch Calculation” option needs to be selected. An added new feature seen in the advanced case setup tap is the ability to set X-Z symmetry to allow for quicker solution times. One thing to note for the newer version is that if you are opening VSPAERO for the first time for your model, you still need to select the correct Degen Geom file even if it was automatically selected when you opened VSPAERO. If you do not do this, the “Launch Solver” button will be grayed out, and you will not be able to launch the solver.

Page organization and creation in progress, if you have any suggestions, comments or corrections use the link at the bottom to email me (or if you can edit it yourself)