Although OpenVSP v3 has dramatically improved capability over v2, many users have significant investment in models they have made for older versions of OpenVSP, VSP, and even RAM (Rapid Aircraft Modeler) going back to the inception of these tools. OpenVSP v2 may still meet most of these users’ needs, so when faced with the time investment required to recreate their models from scratch, they may reasonably choose to continue using v2. The capability to import v2 files into v3 provides an upgrade path to allow these users to be more productive with v3 very quickly.

To convert an OpenVSP v2 model to a v3 model, begin by selecting File→Import…→OpenVSP v2 (.vsp) and selecting the desired v2 file. After clicking “Accept” the v2 file will be loaded in OpenVSP and automatically converted into a v3 file (*.vsp3) once the model is saved.

The current status of features in OpenVSP v2 files supported in OpenVSP v3 is listed in the table below. The two columns filled with yes/no indicators report whether each v2 feature has a counterpart in v3 and whether conversion can ever be possible given the information stored in the data files. In most cases, a yes in the first column leads to a yes in the second column. Notable exceptions are v2’s user parameters, parameter links, and WingStructure components. Similarly, in most cases, a no in the first column usually means a no in the second column. One exception is v2’s Hybrid Wing Body, which has essentially been replaced by blendable wings. Finally, some features such as Textures and Labels were deemed to be of insufficient priority, such that a conversion capability for those features is not planned. The final column reports the status of each part of the converter, and most of the features are marked in green as complete. All tasks marked in grey cannot or will not be supported by the converter. 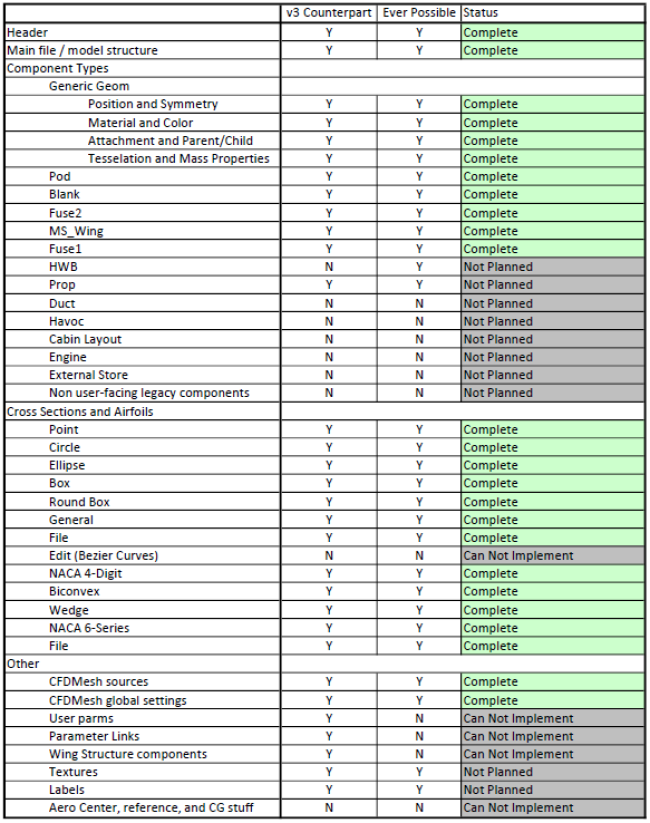