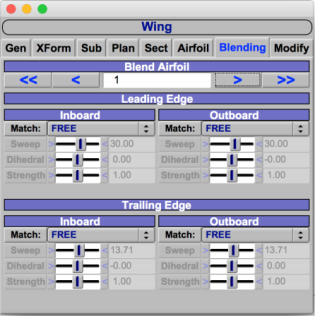 Blended wing controls are available on the Blending tab of the wing geometry GUI. At the top of the tab under “Blend Airfoil”, a wing airfoil selector is available. Below, the tab is divided into two sections horizontally: Leading Edge and Trailing Edge, and two sections vertically: Inboard and Outboard. Each of the four sections lists a drop-down labeled “Match”, along with controls for sweep, dihedral, and strength. “Match” is used to constrain the planform curve to desired values, summarized below: